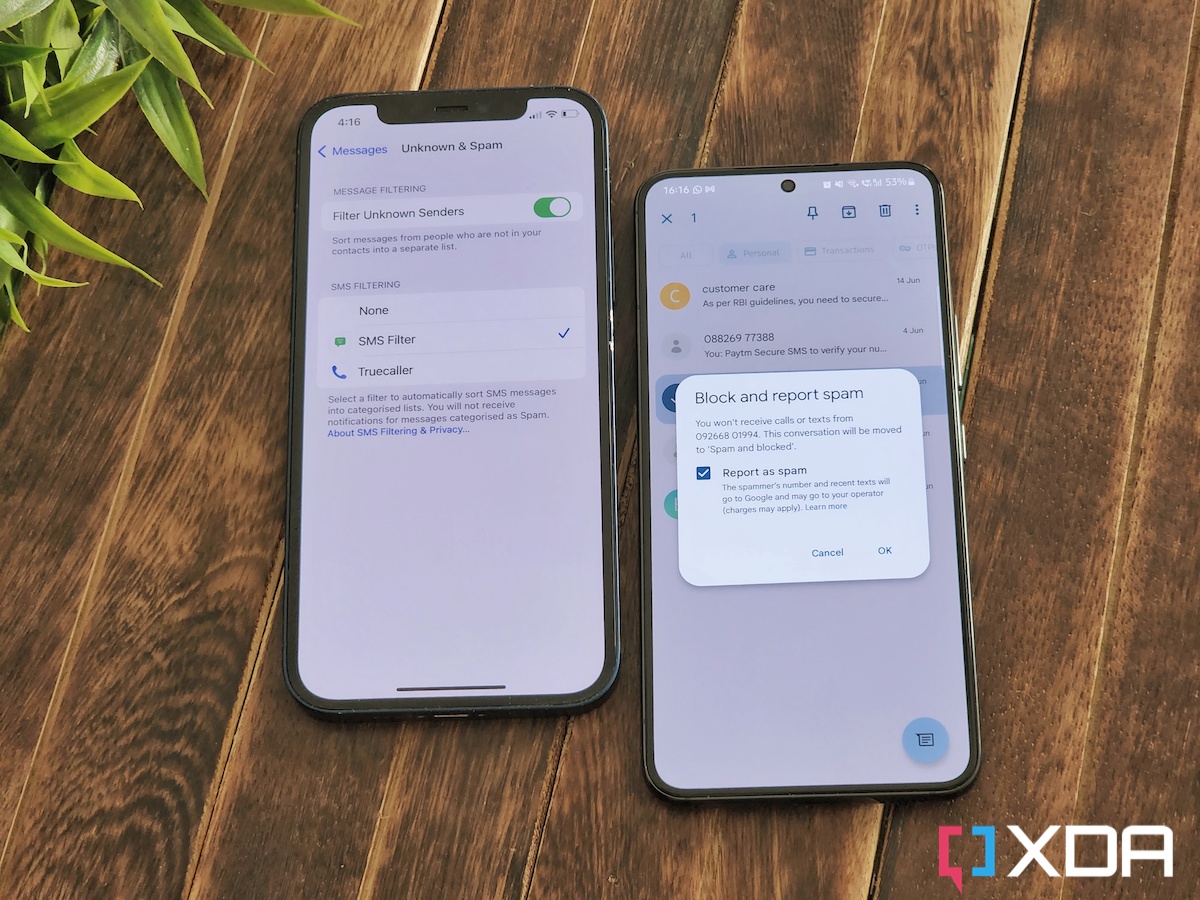 We all receive occasional spam pings from spammers and unknown random numbers. Even if you have one of the best Android phones or the best iPhones on the market, it is inevitable that you will receive spam messages. Although text messages aren’t as annoying as telemarketing calls, they can still get on your nerves by jamming your inbox with their sheer size. Not to mention that a lot of these spam messages are a security threat because they often carry a link that they want you to click on.

It is always best to delete these unwanted messages when you receive them. But if you don’t want to go through the hassle of dealing with them all the time, there are ways you can filter out those spam messages and even prevent them from getting on your phone. In this article, we will tell you how to block spam messages on your phone, for both Android and iPhone.

How to block spam messages on Android

The first thing we recommend you to do is download the Google Messages app on Android. This particular app is pre-installed on Pixel devices, but you will have to manually download it from the Google Play Store on other devices like Samsung, Vivo, and more. The Google Messages app comes with an anti-spam feature which works surprisingly well to keep spam away.

There are several different ways to get rid of spam using the Google Messages app, so let’s take a look: This selected option will start flagging spam messages and even prevent them from sending you spam in the future. It mostly works but there are times when some numbers can bypass the spam filter in Google Messages. Fortunately, you can catch those numbers fairly easily thanks to a spam filter that does the heavy lifting to keep your inbox free of clutter. If a certain number exceeds the built-in spam filter or if you receive spam messages from a specified unknown number, here’s how to report spam on Android:

How to report spam on Android phones Google Messages will automatically move the message to the “Spam & Blocked” list, preventing it from texting or calling you in the future. Additionally, you can select the “Report Spam” option to send that specific number to Google as well as to your carrier.

If you don’t want to use Google Messages on your Samsung phone, for example, we suggest you explore the native messaging app and look for an option to block spam messages. Almost all custom skins, including Samsung’s One UI, come with built-in spam protection features to prevent spam messages from making their way to your inbox. The Samsung Galaxy S22 running One UI 4.1 comes with a feature that allows you to block numbers and spam within the Messages app. Here’s how to access it: How to block spam messages on iPhone You can always go back to this list and choose to see messages from unknown senders as well. We suggest that you keep an eye on this particular tab because it also includes messages from banks and other organizations that may send important messages such as a transaction alert or verification code. So if you are expecting an important notification from an unknown sender, keep an eye on this tab. You can also choose to view all messages at once as well, but this view will also include all spam messages.

Alternatively, you can also block individual numbers on iOS to completely stop receiving messages or phone calls from that specific number. Here’s how you can do that:

Well, that pretty much concludes this tutorial explaining how to block spam messages on your Android phone or iPhone. Before we share our concluding thoughts on the subject, though, there’s one last thing we wanted to highlight – using third-party apps to block spam.

Third-party apps to block spam messages on your phone

There is no shortage of third-party apps on both Android and iOS that allow you to block spam messages on your phone. Apps like Truecaller, RoboKiller and SMS Shield are some of the names that are very popular among the users out there. Many of these third-party apps do a better job of filtering and blocking spam, but they also seek permission to access your call logs, messages, contacts, and more. This is one of the reasons why we do not recommend any third party spam blocker app in this tutorial. If that doesn’t bother you, feel free to check out some third-party apps that will help you filter spam more effectively.

Both Android and iOS have improved a lot over the years and are now much more effective when it comes to filtering and blocking spam messages. There is always more room for improvement, but we expect to see more ways to filter and block spam in future versions of both Android and iOS. We’ll try to revisit this article once we have the final versions of Android 13 and iOS 16, so keep your peels off.

In the meantime, tell us how do you filter and block spam on your phone? We’ll take a look at your comments and try to include some of the more effective techniques in this post in the future.